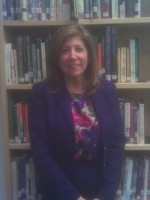 Mount Pleasant Superintendent of Schools Dr. Susan Guiney introduced the non-instructional portions of her proposed 2012-13 budget on March 14. The budget could include up to 12 layoffs.

Faced with a 2 percent property tax levy cap for the first time, the Mount Pleasant School District could be forced to cut as many as a dozen positions next year, Superintendent of Schools Dr. Susan Guiney told the board of education on March 14.

To meet her goal of raising the property tax levy by 2.4 percent in 2012-13, jobs may need to be eliminated, Guiney said.

The new tax cap is “most critical to our work at this time” in creating next year’s budget, Guiney told the board of education and about 40 other residents at the meeting.

Other financial pressures on the district for next year include unfunded state mandates, Guiney said. For example, it will cost her district up to $2 million to create a new teacher and principal evaluation system that has been mandated by the state and be created by the end of the current school year, she said.

The instructional portion of her proposed budget for next year will be unveiled by Guiney on March 21. At that meeting, Guiney said she would “probably” release a total budget expenditure figure. Guiney estimated that 10 to 12 positions would need to be cut for the district to be able to hold the property tax levy to 2.4 percent next year.

The $19.17 million non-instructional portion of the spending plan includes such categories as the board of education, the superintendent’s office, employee benefits, utilities, and legal and auditing services. In the current year’s budget, the non-instructional budget accounts for 22.9 percent of spending, Guiney said.

Resident Eric Seyfried asked Guiney why she was seeking to increase the contractual portion of the board of education’s portion of the budget for next yea by 9.5 percent. The reason for the higher cost in that line is due to higher dues for board members to be part of various school boards associations, Guiney said.

Another resident, Linda Schoin, asked why Guiney was seeking to spend $65,800 for auditing services in 2012-13 when the district has actually spent $57,000 on those services in the current academic year. Business Manager Lisa Sanfilippo replied that the district was “budgeting for a worse case scenario” for auditing services for next year. The current year’s audit was not as extensive as it could have been, Sanfilippo said.

The board of education is scheduled to approve next year’s budget on April 4 and voters will determine the fate of the ledger on May 15.