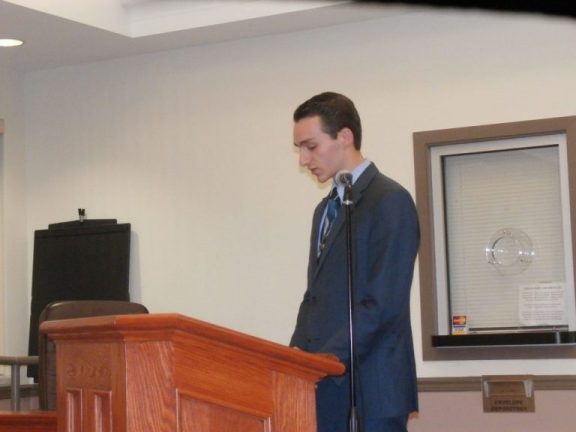 As a Carmel school voter referendum nears, tensions between Kent town and Carmel school officials haven’t eased as Kent town board members blasted the proposed bond that’ll be considered at the ballot box next month.

During a town board meeting last Thursday, Kent town board members criticized the proposed $25 million floated bond, mostly because it would eliminate a parcel of industrial land from town tax rolls. The bond would repairs roofs on all school buildings, make each building ADA compliant, enhance the aging George Fischer Middle School library and build a new bus garage, which is easily the most contentious aspect of the bond. If the bond passes, the school district would purchase land in Kent (located at 1264 Route 52) to build the new garage, which would take some revenue away from the town.

The bond is $25 million, but New York State aid would cover about $20 million.

Supervisor Maureen Fleming and Councilman Bill Huestis expressed concern and Councilman Paul Denbaum conveyed a full throttle opposition to the plan. Also speaking out at the meeting was Carmel school board member John Curzio, who has been opposed to the bond put forth by his colleagues on the board.

Curzio, who noted the comments he was offering were his personal opinion, strongly encouraged voters to oppose the referendum because it removed “prime industrial property” from Kent’s tax rolls, hurting town residents by shrinking the tax base.

“Forcing Kent taxpayers to make up the difference, which in effect would be an additional tax increase on top of the cost of the bond,” Curzio said, adding Carmel school officials have disregarded the concerns of Kent officials.

The Carmel school board should have split the bond into two votes; one for the roofs, ADA upgrades, and library improvements and another solely for the bus garage, Curzio argued.

Curzio also criticized the district for pushing out information to voters in a deceptive manner. Carmel voters received two different fliers about the bond, but Curzio argued the first flier failed to mention the interest would cost taxpayers an additional $10.7 million and the second flier put that information in the smallest possible font that would make it hard to see.

Huestis, a Carmel High School graduate, said he’s always supported educational activities, but the bond would be another tax on homeowners, some that are already feeling the pinch. Many seniors have had to leave the area because they can’t afford the high taxes anymore, he noted.

He said it was important to keep the parcel for the proposed bus garage on the tax rolls and try to develop that land commercially. Huestis said he encouraged school officials to use Putnam County’s Fair Street property for its new garage as a shared service.

“I respect what the school’s trying to do, but we need to cost conscience,” Huestis said. “I am very concerned.”

Fleming, who said she has always voted for every school budget offered, also condemned the bus garage component of the bond. She said in a town that has such little industrial and commercial property, losing industrial land to the schools would be painful.

Councilwoman Christine Woolley asked Curzio if the bond is turned down, would the school board then offer a bond only for building upgrades and leave the garage out of it, to which Curzio replied, “that’s be my hope.” Since construction isn’t supposed to start for another couple years, Curzio said if voters shoot down this bond, another referendum could still be set and not delay the upgrades.

Carmel Superintendent of Schools Andy Irvin said he stands by both mailers. The first mailer, which did not mentioned the interest, Irvin said district officials assumed residents knew there would an interest payment, similar to taking out a mortgage on a house.

The second mailer included the interest cost after Irvin was approached by a resident about it. When asked if the font should’ve been made larger, Irvin said no. He said the interest payment has been discussed openly during meetings and is online for residents to read about.

Irvin pointed out the district will also get state aid on the interest payments so local taxpayers would not bear the full $10.7 million cost.

By the end of the bond, the district will have paid a little more than $15 million overall, Irvin said.

As for the bus garage going on a Kent parcel, Irvin said the location being pursued is the best spot possible, noting other possible locations were too costly or might not even be plausible. The chosen parcel already has DEC approvals and is level, clear land that is shovel ready, Irvin said.

Board president Greg Riley echoed that, stating in an email, “The other properties would have cost the district significantly more to get them to the buildable condition the chosen property is in. And when asked why the bus garage wasn’t a separate proposition, his reply was, “The board discussed the options and the final decision was to make it one proposition.”

Regardless, it doesn’t seem Kent officials will be happy if the bond is passed.

Denbaum offered the most stinging words about the bond and toward the school board. He said other Carmel school board members spent time and resources hoping to personally destroy and tear down Curzio instead of focusing on students. The majority of the board voted last year to hold a removal hearing for Curzio because they claimed he violated state education law in the manner in which he opposed a failed $85 million bond referendum last year.

The small note about the $10 million interest that Denbaum said was in microscopic font proves the board is encouraging residents to support it using taxpayer funds. He called it a “manipulation of facts” and “rank propaganda.”