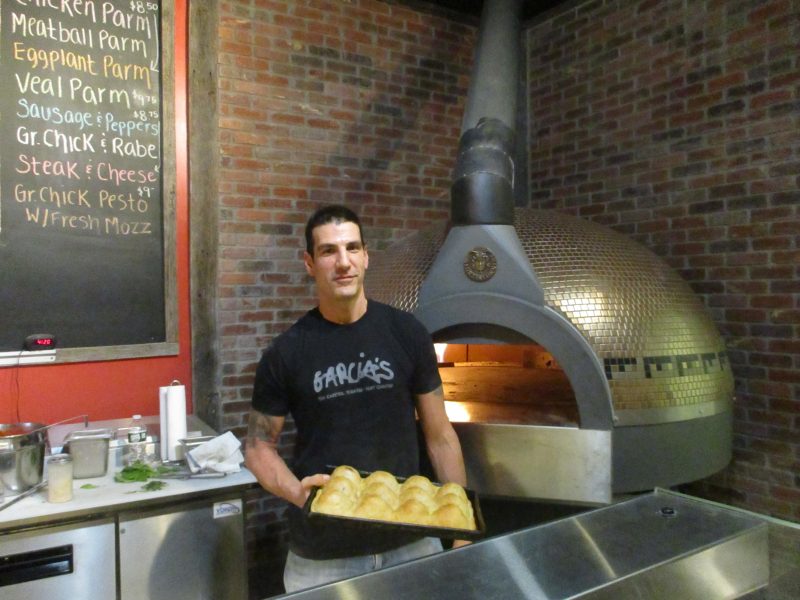 Brewster resident Jeff Aquilino is the owner of Catania’s in Mohegan Lake. He is holding some of his mini-calzones, which he said are his signature item. Photo credit: Neal Rentz

Catania’s, which had its initial home on Arthur Avenue in in the Bronx, was originally a bread store, Aquilino said. One day a customer was served a slice of pizza and through word-of-mouth people lined up in large numbers seeking to purchase their own hot pies.

Aquilino is continuing his family’s tradition by owning and preparing pizza and other Italian favorites out of Catania’s off Route 6 in Mohegan Lake, which he has operated for about a year after moving his restaurant from Yonkers.

“I around looked for a long time,” he said. “It just looked like the right fit.”

It took nearly a year to convert the former frozen yogurt shop into the restaurant, he noted.

Aquilino said the restaurant is named after the maiden name of his late grandmother, Antiette. Three previous generations of his family have worked to keep the restaurant in operation, he said.

Owning and operating a restaurant is not easy, Aquilino said. “You’ve got to be crazy to be in this business,” he said, noting it takes long hours of work and dedication to succeed in the restaurant business. “I fit the bill,” he remarked.

The signature item at Catania’s are the mini-calzones, which are stuffed with ricotta cheese, veal and peppers, chicken parmigiana or meatballs. “That’s our main gig,” Aquilino said. “We have the same pan from 1955.”

The trademark of Catania’s is its rotating Italian brick oven powered by wood and gas, which is used for preparing such dishes as pizza and chicken wings. Aquilino said he likes to set the oven between 650 and 675 degrees, though the heat could go as high as 900 degrees.

Pizza is served both as 12-inch individual pies, which take about three to four minutes to prepare, and by the slice. The most popular pizza is the Classic Margherita, which features fresh mozzarella, plum tomato sauce and fresh basil, Aquilino noted.

The wood fired wings are served in the barbeque, Buffalo or spicy maple styles. “They come out really good,” Aquilino said.

Some of the other items on the Catania’s menu are pizza rolls, wedges, salads, pastas and a variety of entrees.

Aquilino said local pizza restaurants such as his own offer a product the national chains do not. “The quality here is second to none,” he said. “I know those chains aren’t using fresh ricotta from Arthur Avenue. We get it right off the truck. It comes in on Wednesday from the Pennsylvania Amish country.”

“Those chains don’t have fourth generation hands,” Aquilino said. “I’m the last incarnation of the old school type of pizzeria with kind of a new twist on it.”