The BYSNS started off the ice-hockey season with an 8-7 statement win over visiting WHITE PLAINS on their senior night on Sunday at Brewster Ice Arena.

Jonathan Graham netted the go-ahead goal for the Herd with 2:37 left in the game to put the BYSNS up 7-6 with the assist coming from Timmy Froesel and Connor Brooks. Froessel provided a necessary insurance goal just 40 seconds later on a power play.

The Tigers got a late goal from John Myers with 23 ticks on the clock but it was too little, too late.

Froessel and Graham had two goals each for the BYSNS (1-0). Matt Gergley stood on his head in net, recording 40 saves for the Herd.

HORACE GREELEY and CORTLANDT faced off twice last weekend with the Quakers earning a 5-4 win in the first meeting on Saturday.

Jacob Rothman paced Greeley with two goals while Joe Jimenez sparked Cortlandt with two tallies. Jack Tuite had a goal and two assists for the Rebels.

After Greeley received goals from Ilan Laurence and Ben Cohen to tie the contest up at 3-3, Jimenez scored the game-winning goal for Cortlandt with 3:41 to play.

MAHOPAC erupted for 10 third-period goals to cruise past FOX LANE 14-4 on Sunday night. It was the Indians’ senior night and the season opener for both teams. 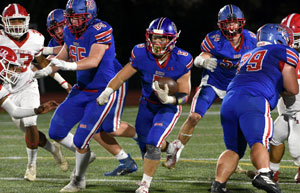